My big sister’s birthday was 2 weeks ago. I was having trouble figuring out what I wanted to do, but then I came across this pattern for Toothless on Pinterest. I thought it was adorable and decided to make it for her. Here is a link to the pattern: Toothless pattern

Unfortunately, I haven’t had a whole lot of time during the day to work on it and lighting at night is terrible (for working with black yarn, anyway). So here I am, nearly 2.5 weeks late, and still not quite done. I have all the pieces except one pair or tail fins. Tomorrow or the next day I should finally be able to put it together. Thankfully it’s a pretty straight forward pattern to work with so it turned out to be a good one for me, since I haven’t done Amigurumi yet. I did learn a few things, though.

The tail, as stated in the pattern, is another person’s creation (and is credited). I did not stop at row 15 (which is where the Toothless creator stopped) and finished the last 2 rows. It is also an easy pattern, however there were 2 terms that was new to me (and apparently to quite a few people).

One term was the double ring. I’m familiar with the magic ring (mr) but haven’t heard of the double ring before. A link to a description is provided. If you need to see it being done like I did, I found this video on YouTube: https://youtu.be/KhLdNp56P6s

Also for the magic ring (or magic loop), which is used for the rest of Toothless: https://youtu.be/LNn20ar8LZE

The other term is ‘m2’ but, after skimming the comments, I learned that it just means sc 2 in the same stitch. So ‘m2 x2’ would be ‘for the next 2 stitches, sc2 in each’.

Pictured below are most of the pieces. Just missing the tail (didn’t have it done last night when I took the pics) or tail fins. Also, only 2 of the 6 little horn are pictured. Only the head and body are stuffed; I’ll try to remember to include a group pic of all the pieces once they’re stuffed when I post the finished piece.

Quick note: the wings use ‘foundation sc’ which I have never done before. Here’s the YouTube video I followed:

I suggest using a different color yarn to practice this technique on, to make seeing what you’re doing better. 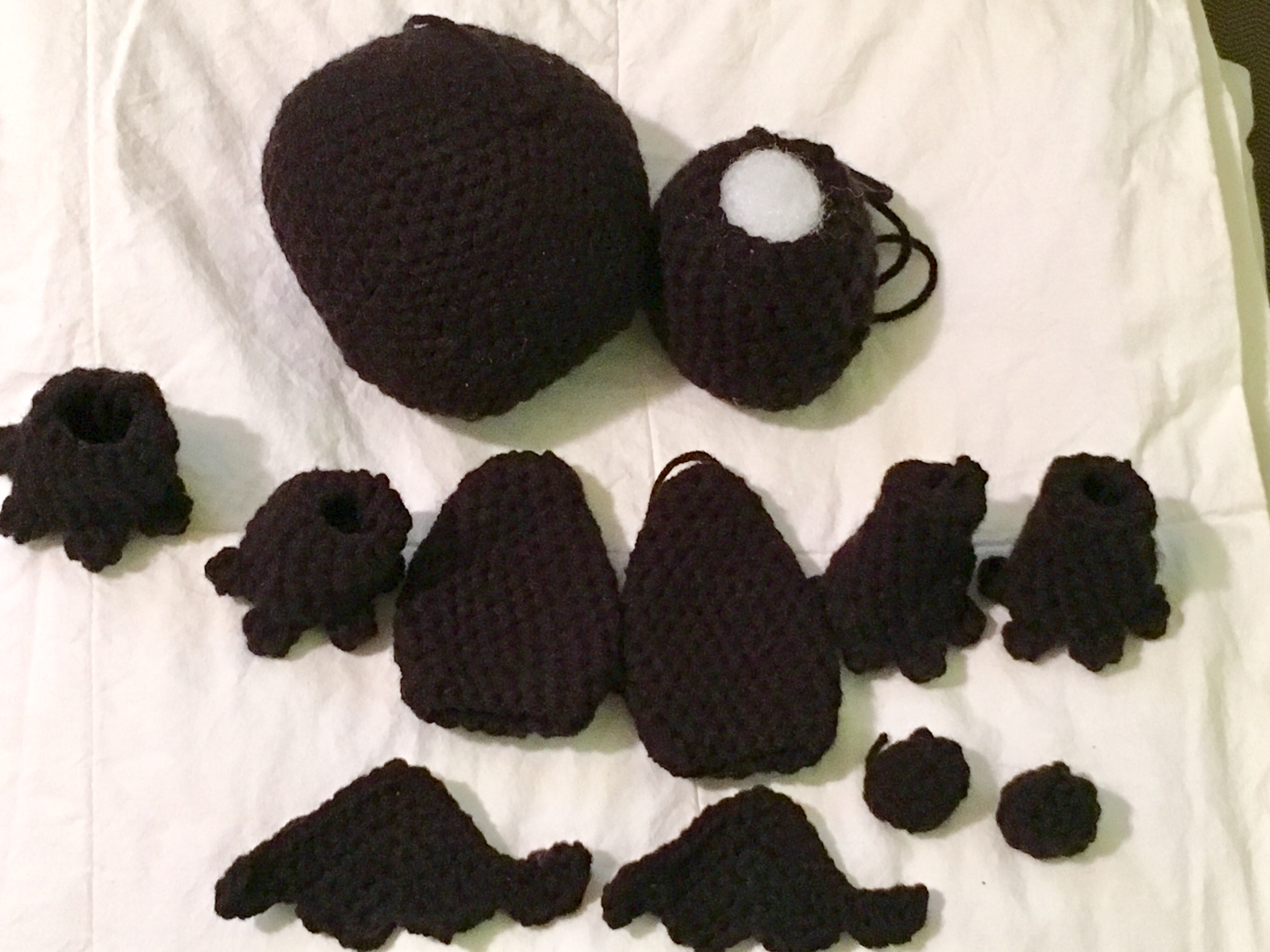 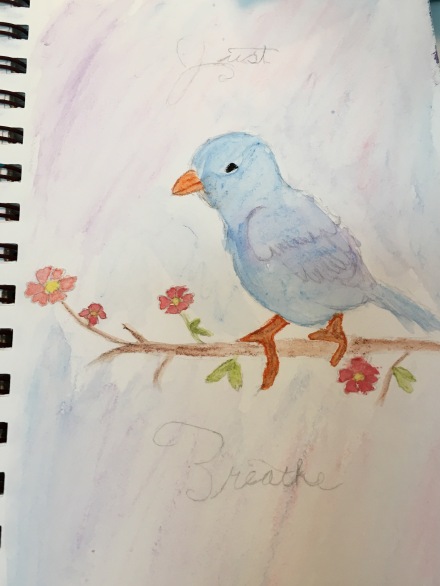 Between my hours at work doubling this summer, more pet/house sitting than usual, and the adventure of finding more of my bio family, I haven’t had much of a chance to crochet or draw or anything. Especially not much time to actually finish a project.

A couple weeks ago I was waiting for my tire to be fixed. After a near sleepless night, I was exhausted. Stressed, overwhelmed, and anxious as well. So I took out my art journal and sketched a birdie on a tree limb that I copied from a tattoo I had seen. Over the course of the past few days, when taking a break from school and organizing/lacking, I added color to it with my watercolor pencils. Only my 2nd or 3rd time using them, so I’m impressed how it turned out. 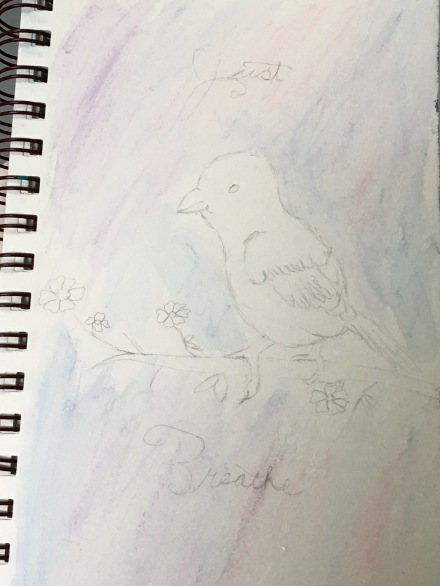 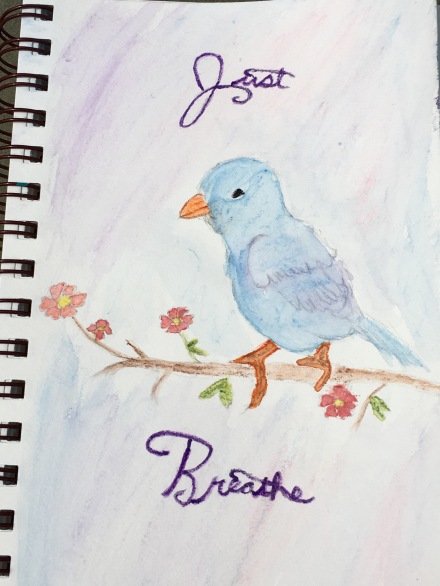 I’ve seen art journals before and lots of ideas for them on Pinterest lately so I decided to start one of my own. I have 2 entries so far. The 1st:

This is a little darker in the picture than it really is. I used oil pastels for the background. 2 different blues (blue & sky blue) and touch of purple. For the final touch, I used white to blend them together better. I loved the final result. I did this before bed last night. Then this morning I finished it. For the word, I just used white and purple soft pastel. There’s a hint of orange, which was a mistake, but ah well. I figured this isn’t bad for my 1st attempt at using oil pastels.

My 2nd entry I started before work this afternoon and just finished (just added the clouds and trees):

This time I used soft pastels for everything. This is another 1st for me. I’ve never used pastels (neither oil nor soft) before. 3 shades of blue for the sky, then white for a smoother blend and to lighten it up. For the snow, mainly white with a touch of gray and blue here and there. For the stream, I used the darker 2 blues that I used on the sky, a touch of green and outline it with gray. I thought it looked a bit too plain so I added a couple trees using a green colored pencil and a white pastel for the snow caps, and a white pastel for the clouds.

I got the idea for this when I was driving to work after last weekends blizzard. Being in ‘Amish country’ there’s a lot of farmland. I was passing a field, covered in snow (obviously) but the snow was untouched and there was a brilliant blue stream going through it. The blue against the white, and the fact it was all pure and untouched took my breath away momentarily. I couldn’t pull over to snap a picture, unfortunately. But I decided to try and recreate it using the soft pastel set I was given by a coworker and dying to attempt.

I’m looking forward to seeing improvements with my use of pastels (and in my art in general). Any tips or suggestions are always welcome.  🙂

Finished the charcoal drawing I started the other night. I may try and use a bit of white paint or pastel  to brighten the moon. If so, I’ll add that picture later. For now, here we go:

Edit: I did wind up doing a bit of touch up. I found my tortillons (blending tools) after I was done, go figure. So I used those to blend the sky a little better. Then used a white pastel to brighten the moon. Ran a finger around the edge of the moon to blend it w/the sky a bit. 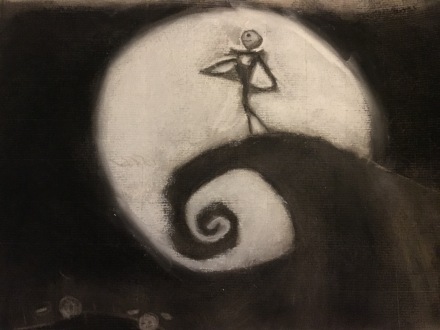 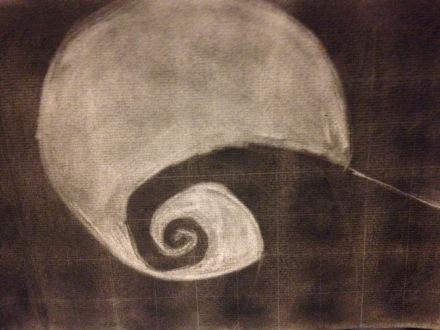 The very beginning of baby blanket #1: 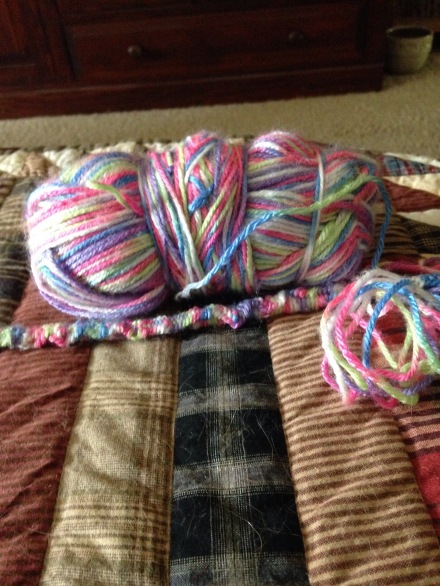 But that’s for another post. Tonight I started working on a charcoal drawing for the first time in years. It was supposed to be my big sister’s bday present (which I kept putting off working on..bad sister). She loves ‘The Nightmare Before Christmas’. So I’m doing the scene with Jack by the moon. It’s not completed yet, I’ll post the finished version sometime this weekend. But for now, this is what I have:

Here’s my newest completed project. Well, nearly completed….I just need a button. I used this pattern: one little rayndrop: Crochet Hook Case http://onelittlerayndrop.blogspot.ca/2010/03/crochet-hook-case.html
It was a little confusing to follow in 1 or 2 places, but I made do. I didn’t intend to use 2 of the same colors, they just happened to be in my stash. I had just enough white for the front cover and I accidentally made too many pockets (I miscounted and misread how many I needed to make) but all in all, I like it. I have a few sizes that I have 2 hooks for, so it’s not bad that I made extra pockets. 🙂 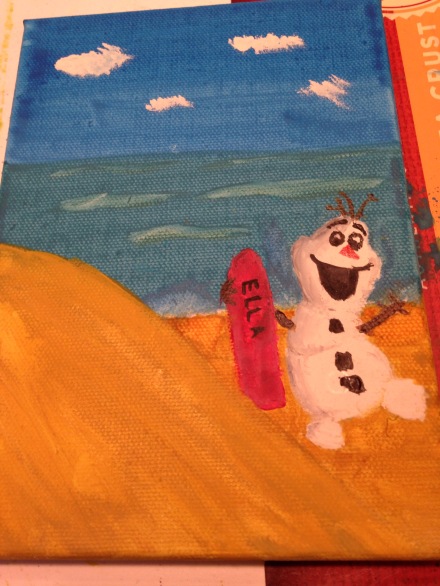 It’s a little lighter than the pic shows, but I still like how it came out.

I’ve only ever done a couple of paintings outside of the art classes I had to take in school, so I’m no painter. But my nieces love ‘Frozen’ so I’m working on an Olaf painting for the younger of the 2. I was originally going to do one of him snowboarding but I screwed up the background. Then I remembered his ‘In Summer’ song and new what I was going to do. It’s almost done:

This 1st one was taken while still wet and poor lighting

Nearly 2 weeks late, but I’m finally posting pics of the completed Harry Potter scarf I sent to my little cousin.
Folded in half; tail still out: 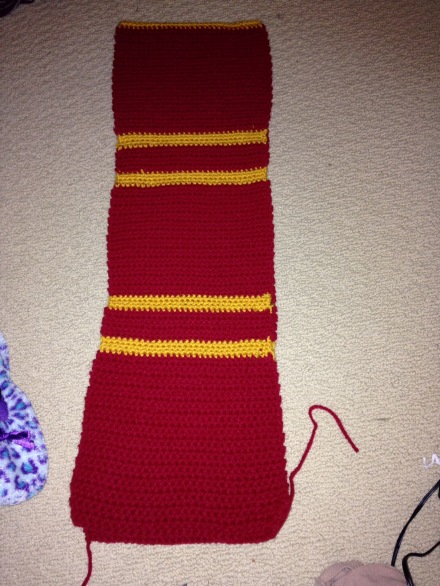 The beginning end turned out wider than the rest. I guess when I continued it the following day (and the other days) I accidentally used tighter tension. Now I know what to watch out for as I work on the 2nd one for his mom’s friend. I think it turned out wider than a scarf should be….but that could just be me. We are our worst critics after all.

Thursday I began working on a ‘Harry Potter’ scarf for my young cousin and a friend of his mom’s (who saw me post about making one and offered to pay me making one…it’ll be the first thing I’ve sold that I’ve made myself!). I’ll post a pic of the finished product as well as the cable scarf, which is knitting up quickly, when I’m done with them in a couple days. 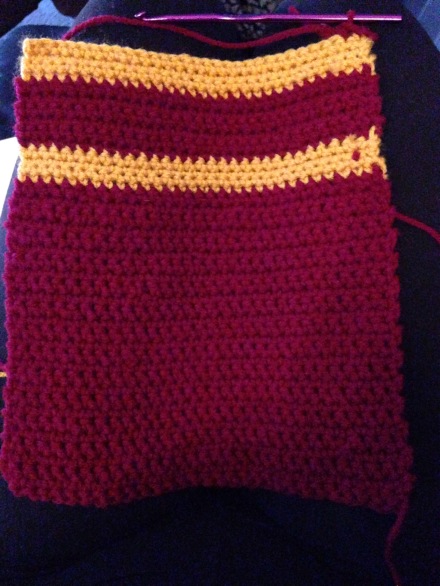 I’m using this pattern I found on Pinterest: http://www.craftster.org/forum/index.php?topic=238542.0
If you don’t know how to change colors, this YouTube video taught me how a month ago (I just skipped to ~30 sec in): http://youtu.be/6979knxSLKM